AKC sent me their mid-year stats for agility dogs throughout America. I was shocked, I mean shocked, not to mention thrilled, to learn that an 8" papillon is the highest ranking agility dog in America, and this by a considerable amount.  I cruized the internet and YouTube in a frenzy looking for any info, photos or videos of this dog, but all I can find so far are a few photos, copied here. 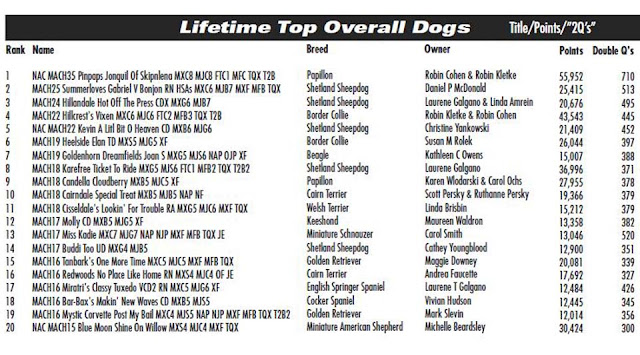 There's even another pap at 9th place, with almost 28,000 points while earning 18 MACH's, beating out both top shelties for speed.
All this blows my mind. How can it all be true? There must be some mistake. How old is this superdog? How big is this dog? I need to know. So I did some more research.

His owners hail from Seattle, WA.  West coast.  Lots of trials out there. Lots of money.  They compete with other dogs as well.

Recently I found www.dogshowscores.com where you can go punch in any AKC dog's registered name and it comes up with all the dog's scores back thru 1999.  So I looked up "Pinpaps Jonquil Of Skipnlena" , and sure enough, scores all the way back to Tigger's first Novice Q on April 4, 2000.  I saw he's been competing for 12.5 years, at 8".  So he has to be at least 14 years old now, and still going strong.  WOW!  WOW!  WOW!  Between 2000 and 2006, with only a few exceptions, Tigger scored 1st place, and with the point doubler in place, racked up points quickly. Beginning 2007, he begins taking some 2nd and 3rd places, but still a vast majority of 1sts.  By 2011 he's getting beat for 1st quite often but still places high on every run, and by 2012 he has no 1st places. He is slowing down. But not by much. His speed is still phenomenal, averaging over 4 yps.

Laura and I tried figuring out how many trials this dog has had to go to every year, on average, to MACH 35 times in 12 years.  35 x 20 QQ = 700 days of trialing with no mistakes divided by 12 years = 58 1 day trials per year.  Factoring in that no dogs QQ every single day, and giving Tigger a 70% Q rate (50% is about average) , and since dog's don't QQ every single day even when they Q, I guestimated up to 100 1 day trials per year.  That tells me, and the list on dogshowscores.com confirms, that these folks are at trials approximately 40 weekends a year.

Reading his titles:
NAC = National Agility Champion
MXC8 = 100 Q's in Standard, 8 times
MJC8 = 100 Q's in Jumpers, 8 times
FTC1 = FAST Century:Requires the MXF title plus one hundred Excellent B FAST Q's of 60 points or greater. The FTC title initials are followed by a numeric designation indicating the quantity of times the dog has met the requirements of the FTC title. (e.g. FTC2, FTC3, etc.)  Since the FAST class became a titling event in January 2007, and Tigger acquired the FTC1 title by September of 2009, it took him 2 years to earn it, and he has not competed in this class since then.
MFC = 100 Q's in FAST
TQX = means he's QQQ'd a lot!
T2B = this class became a titling event in July 2011.  Title requires 15 Q's and 100 points. Tigger earned his title in November 2011, in 5 months, and has not competed in this class since then.

On top of all that achievement, Tigger is beautiful!  I am soooooooooo impressed with this little dog, and with the Papillon breed.  I will continue to try digging up info on this dog.  I want to talk to his handler, Robin, and meet the great Tigger.

P.S.  Since writing the above, I found a few more things on the internet:

Videos (I finally found a few and learned that Robin runs very fast, and Tigger is mostly busy chasing him!):

Thanks so much for all this research! I have a nearly 2-year old Pap that's going to debut in both Novice obedience and Novice agility within the next few weeks. I've long known there was a Pap out there with > 30 MACHs, but didn't even know his call name until I found your blog post. For a dog with this many accolades, it's very hard to find any photos of video of him on the net. So it was great finally seeing photos and video.

I had been thinking all the same things as you: wondering how many trials they must go to each year, what his Q rate was, wondering how old he was today and what age he started competing, etc. I'm also curious about how much money went into earning all those titles. With hotels and travel expenses, I'm guessing $100k or more.

That may be too low of an estimate.

I've heard that a single MACH or OTCH (which would be a dream come true for me) costs about $10,000 if you count training classes, seminars, ring rental, matches, entry fees, travel and hotels. Since Tigger qualifies at a higher rate than normal dogs and wouldn't have to do classes or matches at some point, it's unlikely that the owner paid $350k during his career, but still...!

Anyway, thanks again for the excellent and informative post. I'm sure I'll come back to it many times.