Being a frequent gate keeper (my favorite job), I often wonder why so many people have ABSENT scrawled by their names.  Why would they pay for a run then not show up?  It's so . . . . . uneconomical!

Well now I know.  I was paid up, the RV was all packed to leave out late Wednesday for Kiln (only 2 hours away), giving me plenty of time to set up and enjoy a bit of camping before Thursday's runs. Tuesday night, throwing in my last load of clothes, I decided to wash the house dress I was wearing, peeled it off me right then and threw it in the washer.  An hour later my husband emptied the washer for me, and I heard a big "UH OH!"  My iPhone was in the bottom of the basket!  It had been in my dress pocket and went through both wash and rinse cycles.  I had killed my phone!  I was dumbstruck.

Wednesday morning I called AT&T first thing.  If our 2 year contract was up for renewal I could get an identical 4S phone for .99 cents!  Otherwise a new phone is $549!!!!!    But they wouldn't talk to me about our contract because John's the only contact listed.  I had to wait til he got off work at 4 and meet me over there.  How dumb! Oh well, I could still leave Thursday morning.  The first dog on the line wasn't til NOON Thursday.  Plenty of time to get there by 10 and set up.

We met up at AT&T at 4 Wednesday afternoon, and found out our contract has a year to go, so no cheap phone. They suggested we take mine across the street to iRepair, who took it apart and confirmed that it was fried.  Showed us the corrosion on the mother board.  But, they had a used one identical to mine for $200, so I bought it.  Of course it wouldn't have any of my contacts, apps or settings until I could sync it to my iTunes via my laptop, so we rushed home to do that so I could leave in time, or maybe just miss the first 2 runs.  The damn thing would not sync, nor would it connect to my Bluetooth speaker, and my computer kept serving me popups asking me to update, upgrade, etc., then iTunes wanted me to upgrade, then my anti-virus program announced it was restarting my computer. One delay after another.  I was beginning to get upset.  What good is a smart phone without your list of contact phone numbers and if I can't stream audio books and podcasts for entertainment at night?  I don't know anybody's phone numbers any more, except John's (how dumb is that), and I wasn't about to get on the road without my phone (can you believe we all used to drive around all the time, even cross country, without phones?????).  I struggled for 3 hours trying to make it sync.  The more I tried, the more tense I became until finally I was sobbing. That's when my back started to hurt!

We agreed to take the "stupid phone" back to iRepair Thursday morning.  They erased the whole phone and uploaded the Apple programs like a brand new phone (which they should have done in the first place).  This took a few hours, and my back began hurting so bad I couldn't get out of the car! Brought the "new" phone home, it synced perfectly and was set up just like my old phone.  But I was in such pain, I thought I had kidney stones or lung cancer or something.   No way could I drive, much less set up camp or run my dogs.  I was contemplating going straight to the hospital. This debilitating pain lasted through Sunday.

After my phone got back to normal and a few days passed, my pain miraculously disappeared.  It was simply tension!  But the trial was over.

And that's one way to get an ABS scrawled by your name at the gate. :-) 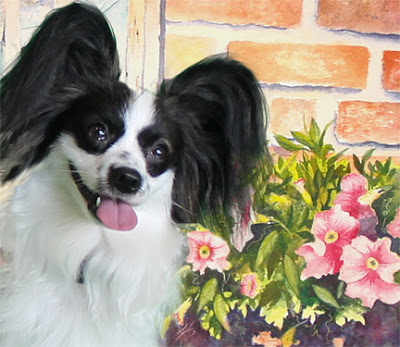 Today is Pepper's 2nd birthday!  My how time flies.  I remember bringing him home from The Pines Papillons (my cousin's place in Florida) when he was 8 weeks old, fat, lazy, and very ungainly with oversized ears.  I intended to sell him but he fit in so well with us, I just couldn't do it.  I had to watch him grow into those enormous ears.  Here's his 2 year Birthday Portrait.

I extracted his image from the green screen photos taken at our agility trial a few weeks back (see below), water-colorized it slightly in Photoshop, and superimposed it over a watercolor painting we own by a friend and well known local artist - Joe Lackey.  It came out good, I think. The whole family will get a 5x7, I'm framing an 8x10 for our entry table, and it will surely become one of my favorite desktop images on my laptop.

Love you, little Winnie Pooch, Honey Bear, Pepperoni, Babutchka, Maniac, and even sometimes by his real name, Pepper-Tu.  Thanks for bringing us so much joy, little fella, and keep on tugging!

Here's the green screen shot, in which only Pepper looks good.  It would have been a wasted photo if I couldn't extract him out. 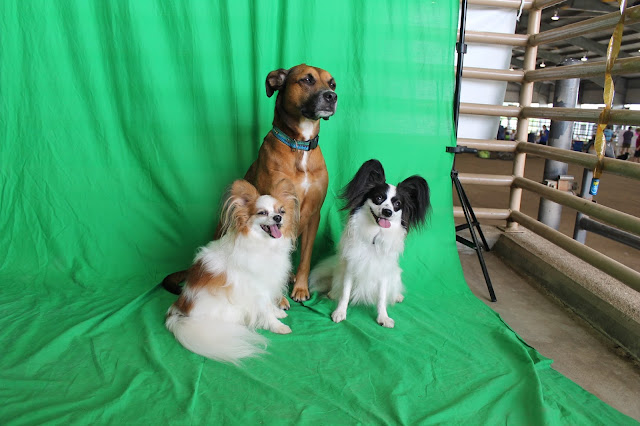 ﻿ Well, I got what I asked for at this trial,  a few Q's.   And a surprise bonus -- some wonderful doggie portraits!

Maxie Q'd all 3 of his Standard runs and NQ'd all 3 of his Jumpers runs!  No QQ's for us this weekend. Oddly, all of his Jumpers runs were 1-3 seconds over course time - that's very odd, because on all of his Standard runs he made good time, 17, 16, and 21 MACH points with 2 1st places and 1 2nd place.  He mostly walked his weaves, though, and back-jumped 1 jump because I mis-cued him.  I held my own, not ever getting lost on course, but he's not yet back to his old self.  Will he ever be? After his last run we visited the on-site chiropractor who popped several vertebrae back into place and I heard a big crack which she said was popping his sternum back into place.  OUCH!  But she did NOT confirm the vet's assessment that he has any compressed disks!

Lucky NQ'd all 6 runs, and never once made course time.  She ran clean twice, but made lots of errors between the other 4 runs.  There were pretty parts to each run, though, and she never once stopped on top of the A-frame to survey the arena and never missed a contact!  I have got to get her into some open-air trials and under-roof matches where she will run fast.  I'm convinced she just hates under-roof agility.  Where are the matches?

Pepper was a superb crate mate the whole weekend, walking on a loose leash, not barking or whining when Maxie left the crate, hardly ever bolting out of the crate, and not even trying to lift his leg on arena posts and other dog's crates as at previous trials.  He is maturing very nicely, encouraging me to begin training him more than casually.

The best thing that happened at this trial is some new photographers that were taking group shots in front of a green screen, then letting you select your background.  First time I've had any of my dogs sit for a professional photograph.  I bought the CD @ $50  (only because they took about 30 pics and gave permission for me to use them any way I want).  I will have lots of fun learning how to extract the photos from the green background and add in my own.  Above is one of many shots taken.  I will be mining this field for individual portraits, for of course trying to pose three dogs at once is difficult, and there are often shots with one dog that looks great while the other two are looking away, etc.  What fun! 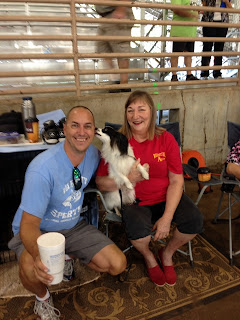 Another good thing, my son and his wife Allison, stopped by Friday noon and got to see Maxie's first run, a fast and solid Q.  Here we are at my crate space, with Pepper probing Nathan's ear with his ant-eater tongue.

Another thing, we learned that the Port Allen arena has a wireless mike system, and Wi-Fi, and will make these available to us for future trials.  I don't have to bring our equipment anymore to call the FAST points.  I can stream Librivox files between runs and relax.  I also got tutored a bit by our Trial Secretary on how the runs are scored and score sheets printed out.

Maybe the best thing of all is that John, using up 3 days of his vacation, worked his tail off the whole 4 days, beginning by supervising the new professional movers in loading and offloading of the trailer on Thursday afternoon then helping Nedra and me set up tables and hang signage around the arena, then showing up at the arena by 6:30 every morning, being in the ring at every course change all three days, filling and tamping holes (which a dozen or more competitors thanked him for profusely, or came up to me and praised him to the skies) and being the last to leave every night helping the arena guy with the injured hand water down the dirt, and organizing the equipment for pickup Sunday after the trial was over.  It felt great for me and our dogs to have him near and feel so well supported.  He was my hero.

Unfortunately, our Ring Steward decided to "economize" on volunteer concessions tickets this year, consequently she gave John only 5 $1  tickets per day, not counting Thursday!  Just enough for one small hamburger and fries per day.  As a result, not for the lack of food (because we brought or bought our own) but for the principle demonstrated, we are both less inclined to bust our butts in future.